A LIFE IN FAST MOTION

A body in motion tends to stay in motion, and at Leisure Care we know that life is just getting started at retirement. At Fairwinds – River’s Edge in St. Charles, Missouri, one Leisure Care resident embodies this idea, even in the face of daunting health challenges and devastating personal loss.

Lee Nunn was no stranger to adventure in his younger days. A paratrooper in the Army, he was part of a special ops unit working with locals to create havoc amongst enemy troops. He was also on the Kimpo air strip in South Korea when a MIG-15 Russian enemy fighter plane flown by a North Korean pilot defected to the South, a historic salvo in the opening rounds of the Cold War.

One of Lee’s fondest Army memories is being chosen as one of Marilyn Monroe’s bodyguards when she visited the troops in South Korea—cutting short her honeymoon with Joe DiMaggio in order to perform. “She wasn’t prepared for such a show—she only had one cocktail dress with her, which she wore for her performance, then quickly changed into warm Army fatigues for the bitter February temperatures outside,” Lee recalls.

Back in civilian life, Lee built a career at Lincoln Engineering and enjoyed spending time at the golf course. Lee and his wife Billie’s last home before moving to Fairwinds – River’s Edge was on a golf course. One of his guilty pleasures was playing golf every day except Mondays, and that was only because the course was closed that day. Billie used to say she had to take up golf so she could see him, and although she “couldn’t play at all,” they did have fun together. He doesn’t like to brag, but he’s racked up four hole-in-ones, winning a Volkswagen GTI one year and a trip for two to Hilton Head the next. He claims he was the reason one organization closed down its hole-in-one prize giveaway!

Moving from their home on the course and into Fairwinds – River’s Edge was a tough decision, driven by Billie’s health and mobility issues. Still, it was Lee who wound up in the hospital not long after the move, with six life-threatening clogged arteries requiring open-heart surgery. Other health issues followed, then Billie became gravely ill. Lee moved into an apartment across the street from Billie’s nursing facility to be close to his wife during the last months of her life. After her death, withdrawn and depressed after losing his long-time partner, he made the decision to move back to Fairwinds – River’s Edge, a place they had both felt at home.

The couple had made many friends at Fairwinds – River’s Edge. Once back and settled in (with newly adopted rescue pup Lilly), Lee asked one of his lady friends out on a date. Darlene gladly accepted, and as a couple, they’re still going strong. For their first date, they went to a used car lot looking for a sports car. Getting out of the car, Darlene looked over to say something to Lee, but he was nowhere to be seen. He had tried stepping over an obstacle, and still getting used to his new orthotics, fell flat on his face. The paramedics came, and Darlene rode up front in the cab (wearing a leg brace on her own broken knee cap). The driver put her in charge of blowing the horn to help keep traffic cleared. Now that’s a first date to remember! 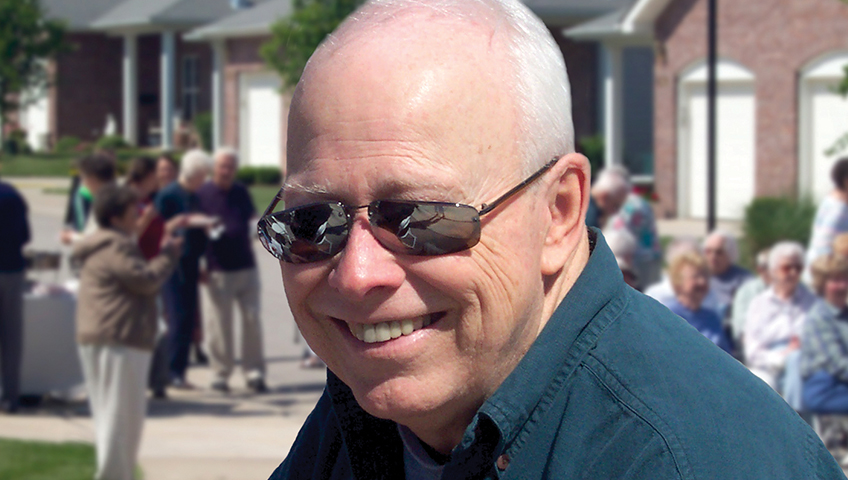 As a car fanatic, Lee bought a GTO, and on one of their road trips, he asked Darlene if she’d ever gone 100 mph. She said she hadn’t, so he “lit it up.”

His next car was a flat black 2006 C5 Corvette, not the easiest thing to get in and out of, but he didn’t let that hold him back. These hot rods led to his “Richard Petty Experience,” something that had been on his bucket list until an offer by Leisure Care made it a reality.

“I was driving around the track, and the escort kept telling me I needed to get over so the other cars could pass, and all I wanted to do was speed up.”

“I was driving around the track, and the escort kept telling me I needed to get over so the other cars could pass, and all I wanted to do was speed up.”

He said he “only” got to a top speed of 98. Only?! The worst part of this experience, Lee recalled, was climbing through the side window to get in and out of the car. “I’m not as spry as I used to be,” he laughs.

Lee hasn’t let his losses, his diabetes, heart surgery, or back issues dictate his life. He continues to enjoy his kids and grandkids, travel with Darlene, play golf, and go on outings with friends to Cardinals games, Pere Marquette State Park, and other great local destinations. And he’s got his eyes peeled for his next adventure rod: a vintage yellow truck he’ll gladly race all over town.

Alissa has been working in marketing and the senior living industry for over 8 years. With a B.S. in advertising from the University of Illinois, Alissa has worked all over the world as a freelance communications strategist and writer. Published in Forbes, Senior Finance Advisor, Alzheimers.net and on other leading senior care blogs, she leverages her working knowledge of the senior care industry with leading research and best practices to create engaging content benefitting seniors and their caregivers. In her free time, Alissa loves to travel, read, cook, and spend time with her family.
Next